For centuries pillow fights have existed throughout the world as a fun activity for those aged 3 to 99 years.

At the Library of Congress in Washington DC, for example, you can watch a silent short movie from 1897 of four young girls in their nightgowns having fun while having a pillow fight.

You may also recall the famous series of photos of the Beatles in the Georges V in Paris, celebrating their success by having a pillow fight with their hotel pillows in 1964. 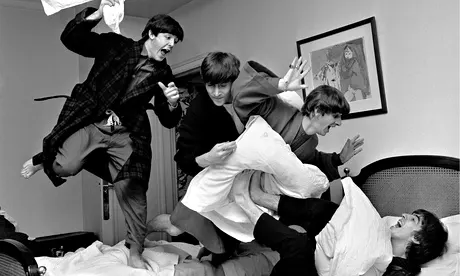 This children's game has evolved significantly in just the past ten years, as you will see. The pillow fight has become a newly popular phenomenon that goes far beyond family fun on a weekend morning.

To engage in this activity all you need is a pillow - preferably a down alternative (the density and wallop it delivers is perfect in a pillow fight); for a playground, all you need is a mattress and a soft floor, and of course some fun friends or family members.

1) A bond with friends and family

How do you play pillow fight traditionally?

A pillow fight is above all useful to have fun and let off steam while laughing, enjoying the many grimaces, shrieks and screams provoked by the blows of the pillows, and sometimes assuming unusual positions. Go back to your childhood and reconnect with this exciting feeling during a battle of giants! To engage fully, you also need to make fun of yourself and have a good dose of self-mockery.

In the event of a defeat, it is advisable to surrender by raising the pillowcase as a white flag.

This activity allows you to let off steam around a classic game and reconnect with your inner child's soul. The legendary game brings the players together in a relaxed and energized atmosphere. Pent up enthusiasm, energy and stress are released in a healthy way as the players (re)discover the mischief of their childhood. Sneak attacks and laughter will soon ensue.

It is definitely a great way to bond with your friends during a sleepover or when waking up on weekends.

2) The future of pillow fighting

International Pillow Fight Day is meant to be a day for a return to the joy and good humor of childhood; the next one is April 6, 2020. With everyone hunkered down and practicing social distancing we suggest making the event an event just for your household - whether it is you and your kids, or your roomate - this is an occasion to have fun and participate in a giant pillow fight.

Since 2008, the first Saturday of April is the International Pillow Fight Day in many cities around the world, including New York, Chicago, Paris, London, Copenhagen and Rotterdam. The timing coincides with Spring and taps in to the feeling that many people have of wanting to run around and celebrate the end of winter.

This is an all-ages and peaceful street fight with safety rules. It’s a fun way to get together with people in your household and relieve stress with a lot of laughs.

Safety rules may vary according to the local habits and organizations, but in a nutshell the rules are:

You can also simply have a pillow fight day at home on April 6, 2020 and the same basic safety rules should apply too.

For your complete information, and to be exhaustive, you should also know that there is a semi-professional pillow fighting league in Canada and that in Japan pillow fighting is a competitive sport with money prices for the winning teams.

So, have fun at your next pillow fight and remember - it’s always a good idea to fluff your pillow!